In this post, we present a brief introduction to deep reinforcement learning. The content of this post is based on chapters 8-11 in the book Grokking Deep Learning.

We first present the NFQ(Neural Fitted Q) learning method. It's a natural transition from tabular learning methods to deep reinforcement learning methods. However, the setup in NFQ violates assumptions used in neural network training such as IID distribution of data. Another issue of NFQ has is the moving target value. These problems are addressed in DQN (deep Q-network). Similar to double Q-learning, DQN architecture can be improved by having two neural networks, which leads to double DQN architecture. We then present an improvement implemented at the neural network level: the Dueling Network Architecture. An improvement of replay buffer is also discussed.

In the last section, we briefly talk about policy gradient methods and how we can implement them using a neural network.

We are talking about deep reinforcement learning so we should expect to see a neural network somewhere in the solution. For the sake of simplicity, we could say neural network is a powerful tool that can approximate any function. Now we have the following decisions to make

Recall in a tabular reinforcement learning algorithm, we have two steps in each iteration

In this sense, the problem becomes a supervised learning problem: we want to fit a model \(Q(s, a)\) so that it's close to the sampled target values. 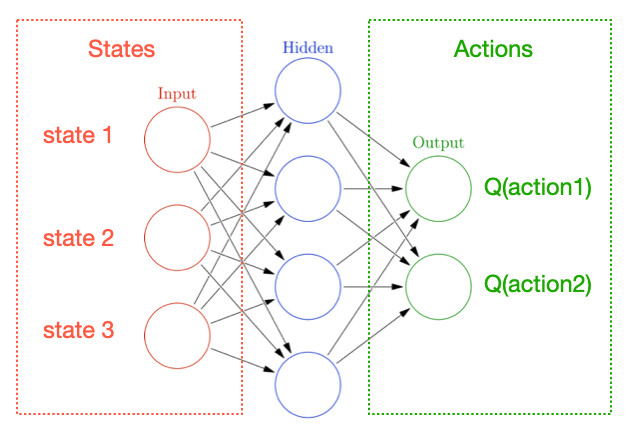 The third question is what loss function should we use? A typical choice is the Euclidean distance between \(Q(s,a)\) and the target value.

The last question is about the optimization method, which is not directly related to the reinforcement learning context. We will not provide details in this post.

Overall, NFQ is a smooth transition from tabular RL methods to deep RL. The implementation of NFQ shares a similar structure to the one used in tabular RL methods. The only major difference is that instead of updating the Q-function values directly, we pass the target value to the neural network as labeled data and use backpropagation to update the parameters in the neural network.

NFQ has many drawbacks. First and foremost, reinforcement learning is not supervised learning. In supervised learning, we assume the sampled data is independently and identically distributed. This is not true in reinforcement learning. Sampled data in a trajectory is not independent. Moreover, when the policy is improved, it also changes the data generation process, which in turn changes the distribution of the sampled data. There is another problem in NFQ. The target value is moving. When we improve the policy and update the Q-function, the target value is changed as a side effect because target value depends on the Q-function.

As we will see in the next section, these issues will be addressed in the deep Q-network. 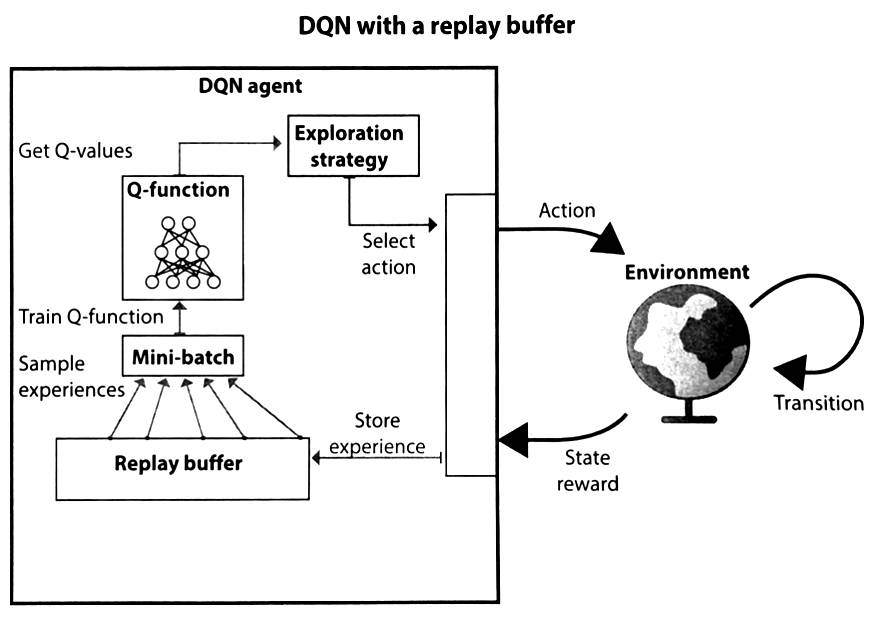 DQN is still a Q-learning method. Therefore, it tends to overestimate values. In double Q-learning, we use two Q-functions; similarly we can have two neural networks to represent these two Q-functions. Recall that in DQN, we already have two neural networks: one for the online model and the other for the target value estimate. In double DQN, we will leverage this structure in DQN.

A quick review of the issue of overestimation. The problem is that we use the following formula to calculate the target value in Q-learning:

Put everything together, in double DQN we have

This relationship is not explicitly represented in DQN. In DQN, \(Q(s,a)\) is represented by the output layer of the neural network and all we are saying is that the action values \(Q(s,a_1)\), \(Q(s, a_2)\), ..., \(Q(s, a_m)\) depend on a common factor (because we have links between the hidden layer and the output layer).

and the neural network becomes: 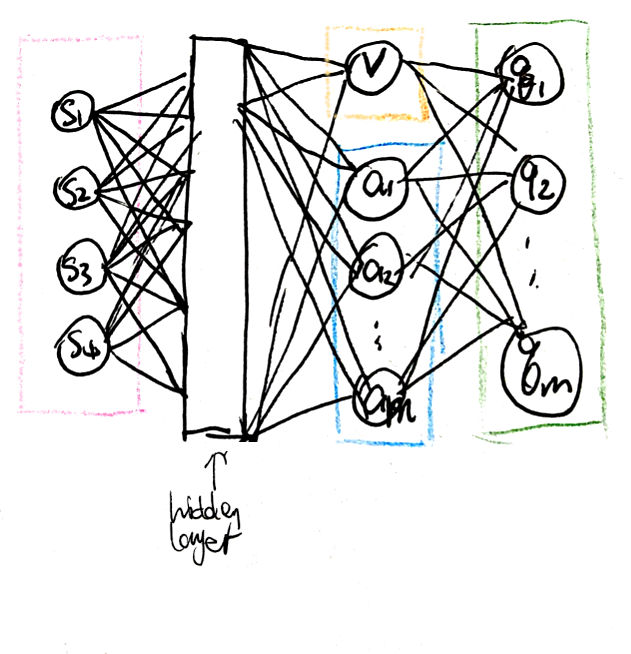 There is a small issue here. We have \(m\) actions and in the output layer we have \(m\) nodes. However, after the split, we now have \(m\) advantage nodes plus a state value node. Mathematically, we have \(m\) equations and \(m+1\) variables, which means we have an infinite number of solutions (because we can always add an offset to the state value and remove the same offset from the advantage value). Therefore, we need an additional constraint to have a unique solution. The constraint implemented in the dueling network architecture is:

Now to construct the nodes in the output layer, we should do

We can simplify the above expression because \(s\) is provided by the input layer and the neural network itself doesn't need to have the concept of action. This gives us:

A naive implementation of replay buffer is to sample experiences uniformly. However, not all experiences are created equal. Some experiences are more important than others thus they should be preferred in some way during the training.

There are two questions here:

The importance of an experience can be characterized by the absolute value of the TD error. To sample experiences, we can use a technique called importance sampling. 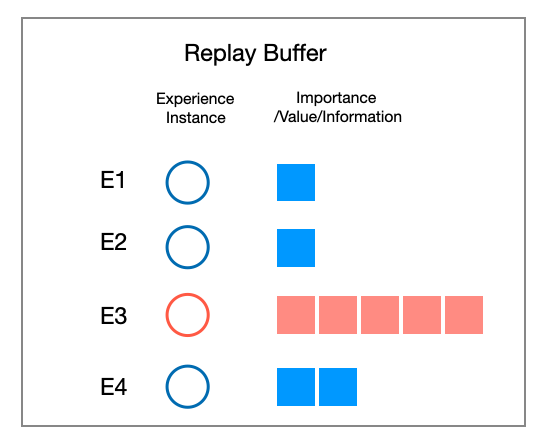 Now let's take a look at what we want and what we don't want. For starters, we don't want to sample instances uniformly because we know E3 is more important and has more value to offer. It's obvious that we want to see E3 more in the sampling. One way to achieve that is to sample instances based on their importance or value. For example, if we draw samples uniformly, the probability of E3 being selected is 1/4; if we draw samples based on importance, the probability of E3 being selected is 5/9.

This approach introduces bias to the system for an obvious reason: the distribution of experiences is changed. When the agent learns from the sampled experiences, it will overestimate experiences with relatively higher importance because from the agent's perspective, those experiences happen more frequently than in reality.

To compensate for this bias, when the agent receives a sampled experience instance, instead of consuming all the information contained in the experience, it can consume a fraction of the info. A fraction of information is implemented as a weighted target value and the weight should be inversely proportional (in a broad sense) to the importance of the experience.

Conceptually, we change the content in the replay buffer to the following form and then sample uniformly from the modified replay buffer.

The second question is too theoretical so we will just focus on parameter updates in this post.

Recall that a reinforcement learning program is an optimization problem. We want to maximize the expected return. Our objective function is

Following the standard gradient decent algorithm, we can update the parameters using the formula below:

This formula is not practical though because we cannot calculate \(\nabla \mathbb{E}_{\Pi_{\theta}}[R(s,a)]\). However, it can be shown that

The right side of the equation is easier to calculate (or estimate). We can sample experiences and take the average of sampled \(R(s,a) \nabla_{\theta} \log \Pi_{\theta}(s,a)\).

Put everything together, we have the following formula to update the parameters of the policy: 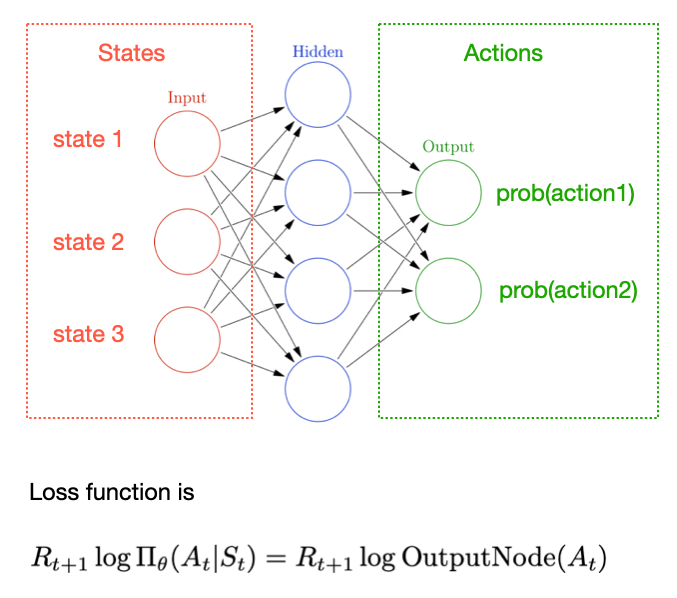 It can be shown that

This means we can include a baseline value in the parameter update formula:

Actor-critic methods use a neural network to estimate the value of a state, which is \(b(s)\) in the above expression. It's called actor-critic method because the policy selects actions and thus acts as an actor while the value function evaluates the current policy and thus is considered a critic.