In this post, we report the experience and lesson learned when commanding motors on TurtleBot3.

The task is to use ROS to send commands to control the motors on Turtlebot3.

Recall the basic setup: Two motors of the robot are controlled by the OpenCR board, which is connected to Raspberry Pi via USB. 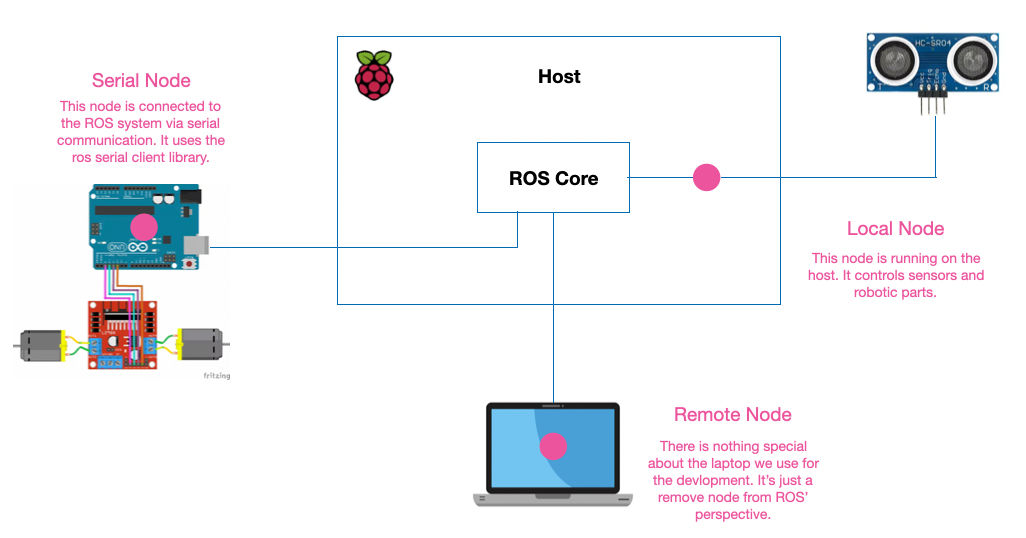 To control the motors, we need to

To install the driver, we can follow the official instruction Turtlebot3 - OpenCR Setup. Note that there is a sanity check at the end of the tutorial. We should be able to push the buttons mentioned in the tutorial to trigger motor movement. If the sanity check fails, please follow the instruction in the section "Click here to expand more details about the firmware upload using Arduino IDE".

Summary - At this point, we should be able to trigger motor movement by pushing the buttons on the OpenCR board. This indicates that the OpenCR is set up correctly.

Here we deviate from the official TurtleBot3 tutorial. In the official tutorial, the roscore is launched on the remote PC and then we "bring up" TurtleBot3 on Raspberry Pi. See more details at TurtleBot3 - Quick Start Guid - Bringup.

Because we only want to test the motor control part and we don't want to launch other things prepared by the TurtleBot3 automatically, we should not use the turtlebot3_bringup package. Instead, we can build the turtlebot packages manually and then launch roscore on Raspberry Pi directly.

First, we need to checkout turtlebot packages. The turtlebot3 packages can be found at ROBOTIS-GIT/turtlebot3. This repository is the ros workspace we need. Here is the project structure of my ros workspace:

The fix is simple, we just need to check out the turtlebo3_msgs package at ROBOTIS-GIT/turtlebot3_msgs.

Now we can build the workspace by executing the following commands:

If the catkin_make command does not exist, make sure the following command is executed

After the workspace is built, we can now launch roscore by executing the command on Raspberry Pi:

Now we need to "bridge" the OpenCR and Raspberry Pi. We've uploaded code to OpenCR when we set up the OpenCR board. The code enables OpenCR to behave like a ROS node. Therefore, this "bridge" step is similar to a node joining a cluster.

The "bridge" operation is handled by rosserial and we need to install it on Raspberry Pi.

We can install the rosserial package by using the command

Because OpenCR is connected to Raspberry Pi via USB, we need to tell ros the serial port to listen to.

Here is the interesting part, I still cannot find any formal way to detect the serial devices. But I found one solution online:

In our case, we know the port is ttyACM0.

It's time to establish the communication between the serial node and ros core on Raspberry Pi. We can execute the commands below:

Note: Each time we launch a new terminal, we need to execute the source ~/ros_workspace/devel/setup.sh command. It's better to add it to the ~/.bashrc file.

Summary - At this point, we know the serial port of the OpenCR connection. We've also run the rosserial tool so that ros core knows about the serial node.

The goal is to trigger motor movement. However, we don't need to go to the low level and communicate with the motor directly because ultimately what we want is to control the robot movement. The robot movement can be controlled by setting the linear and angular velocities. The API provided in ROS for this purpose is geometry_msgs/Twist message. The unit in the message is m/s and rad/s.

To publish a command, we can use the following command:

WARNING: The empty spaces matter in the above message.

How does the /cmd_vel topic work? We notice that if we stop publishing to the /cmd_vel topic, the wheels stop moving. It suggests that the system requires a constant stream of commands to keep moving. This behavior is also mentioned in Understanding ROS using Turtlesim. It seems that the system is modeled as a state machine and we need to provide a stream of ticks. This is a reasonable approach because in this way we can no longer tell the difference between a simulated system and a real physical system. The simulation is usually trigged by ticks.

If we check the turtlebot3_core_config.h file, we can see the line below:

One of the usages of these two variables is in the turtlebot3_core.ino file: (See code)

As we can see in the code, the velocy is set up zero when there is a timeout event.

Summary - At this point, we should see wheels moving when we publish messages to /cmd_vel topic.