This post is a reading note of the first four chapters in the book Probabilistic Robotics. It consists of two sections

The following condition needs to be satisfied in order for the above transformation to be correct:

In some sense \(f\) is the desired or target distribution and \(g\) is the distribution that is avaialbe when we do the calculation. The term \(\frac{f(x)}{g(x)}\), which is called importance factor, is an adjustment because the same value \(x\) has different weights in the two different distribution.

There is another view of this weight factor that is related to sampling. Suppose we have N samples of randome variable \(X\) under the distribution \(g\). Let us denote the samples by \({x_1, x_2, ..., x_n}\). If we need to calcuate the empirical expection of \(X\) under \(g\), we would have

Therefore, performing sampling of \(X\) under distribution \(g\) first and then under \(h\) allows us to get an empirical estimate of \(E_f[X]\).

In the probabilistic robotics framework, the state of the robot is described by a probability distribution and this distribution can change over time when more information is avaialble(e.g. receive more data from sensors).

Bayes filter is a class of algorithms that models the change of distribution of the robot state.

There are three main concepts in this section:

Note: The belief on the state varialbe \(x_t\) means the probability distribution of \(x_t\).

Definition: The belief on the state variable is defined as

Definition: The prediction of the state variable is defined as

The only difference between the prediction and the belief at time \(t\) is that belief takes the latest measurement \(z_t\) into account.

In Bayes filter, we need to make two assumptions to simplify the math calculation.

Assumption: State transition probability only depends on the previous state and the new action applied to it.

Now we are ready to present the Bayes Filter algorihtm:

The inner for loops has two steps. The first step is prediciotn step. Given the previous state and the latest action, we can calcuate the expected new distribution of the state. The second step is correction step. In this step, we adjust our prediction with newly avaialble measurement data. 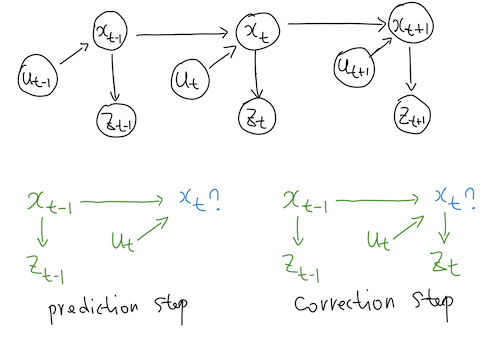 Kalman filter is a concrete "implementation" of the general Bayes filter algorithm. It specifies the formula of station transition probability and the measurement probability. More specificaly, in Kalman filter:

The stat transition probability is modeled as

And the measure probability is modeled as

We also need a prior belief distribution, which is defined as

These assumptions allow us to implement the general Bayes filter algorithm with closed math formula:

The key idea of particle filter is to represent the posterior \(bel(x_t)\) by a set of random state samples drawn from this posterior. Let \(M_t\) denote the collections of samples at time \(t\), the question is how we can update these sample data after we apply actions to the robot and receive more sensor measurement data.

As usual, there are two steps in the algorithm. The prediction step becomes a simple sampling drawn from the state transition probability distribution. This will give us a collection of sample data following \(\overline{bel}(x_t)\).

When we discuss the importance sampling earlier, we have three different distributions.

In the context of particle filter, \(f\) is the belief distribution \(bel(x_t\)); \(g\) is the pridicted distribution \(\overline{bel}(x_t)\) and the importance factor is the measurement probability \(p(z_t|x_t)\), which is an adjustment of belief as new measurement data \(z_t\) becomes available.

As we have seen in the discussion on importance sampling, \(h\) is constructed by re-sampling the samples generated from distribution \(g\) and the probability of being chosen in the re-sampling is proportional to the importance factor, which in the context of particle filter is the measurement probabilityu \(p(z_t|x_t)\).

Putting everything together, we get the following algorithm: 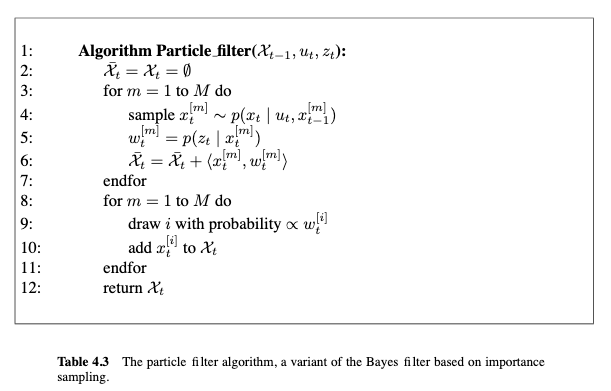